During our fifth ESSMA Connect session, Jon Ander Ulazia - CEO at SD Eibar - joined us to talk about the renovations at the Basque club.

In 2015, SD Eibar promoted to LaLiga for the first time in the club’s history. However, with only 56 VIP seats, no parking spaces and no media area, Estadio de Ipurua did not meet the standards and was in need of an upgrade.

When playing in a league with stadiums such as Camp Nou and Santiago Bernabéu, a 4 row North stand at SD Eibar was insufficient. Therefore the club expanded the stand up to 2,000 seats while incorporating a new hospitality area and a classroom for 90 people.

“We want the fans to know they are part of the club, we believe this is important for our fan engagement.”

As the stadium is located in the middle of the city centre, there is not much space available for visitors to park their cars. Therefore, in the second phase 60 parking spaces were integrated into the East stand redevelopment.

In order to generate more income from hospitality, the main stand was renovated. More VIP boxes, new hospitality areas and facilities for the media will create more matchday income.

In 2020, the fourth and final phase of the renovations was completed. The entire West stand was rebuilt to accommodate 1,700 visitors, while the total number of parking spaces was also increased to 100 and a second media area was created.

As a result of all the renovations, Estadio de Ipurua now has a capacity of 8,100 seats with 4 VIP areas and 2 media areas. 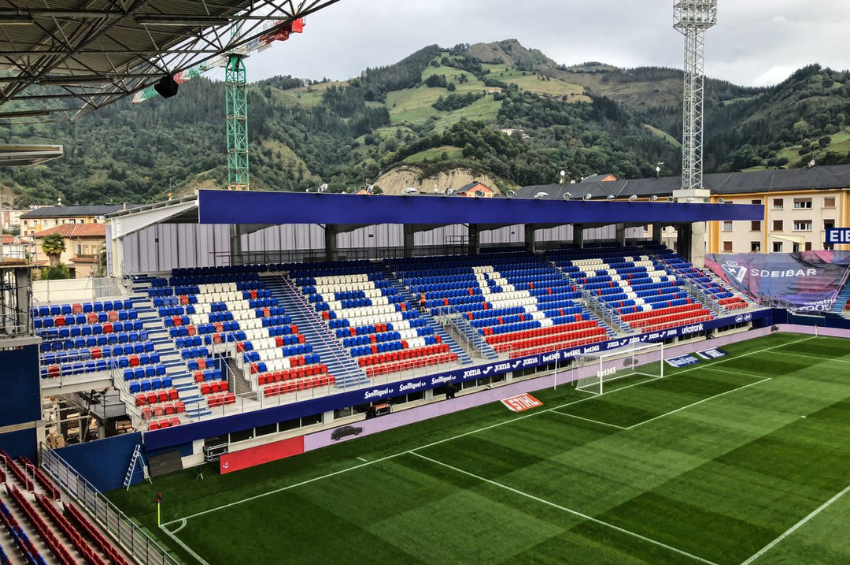 A small club with a large community

During the 4-phased renovation process SD Eibar always had the city’s community in their mind. The classroom in the north stand and a football pitch for the local school are just some examples of the club giving back to the local community.

If you want to learn more about the renovation process of Estadio de Ipurua you can re-watch the livestream now!

As ESSMA is proud to be a GOALS-partner, we encourage our network to fill in the survey on environmental-friendly initiatives
18May

Collecting data and making the right analyses with this data has become increasingly important in the field of groundskeeping in recent years. But how does it work? What data do you collect? And how c…
12May

Read all about digital tickets at FC Bayern München, stadium renovations at Atalanta BC, Paris La Défense Arena as a vaccination centre and more in ESSMA’s industry update.
07May

Aiming to increase safety and efficiency, more and more stadiums are using stadium operations software. With this in mind, ESSMA created its Stadium Operations Software Report including results from o…
15Apr

Read all about 5G at SL Benfica, redevelopment of Stadio Tardini and Maksimir Stadium, fans allowed inside the EURO 2020 host venues and more in ESSMA’s industry update.
09Apr