Interview with Dominik Schreyer: What happens when football is played behind closed doors?

As a result of the COVID-19 pandemic most European football clubs are forced to play games in empty stadiums, some clubs are complaining that the lack of home advantage is impacting the integrity of the competition. Of course, the impact on national health should always be our priority, but is there actually any truth the club’s claims? Can home advantage be proven statistically and is there any way we could simulate it, even without physical crowds in the stadium?

Were you surprised by any specific outcomes of your research?

First, of course, it’s a surprising finding that the home advantage seems to erode when football is played behind closed doors. More precisely, we observe that, historically, home teams win about 46% of the time in matches with fans, but only roughly 36% of the time when there are no fans. Interestingly, this decrease in home wins stems not from an increase in draws between the two opponents, but it is the result of an increase in away team wins from 26% to 34%. 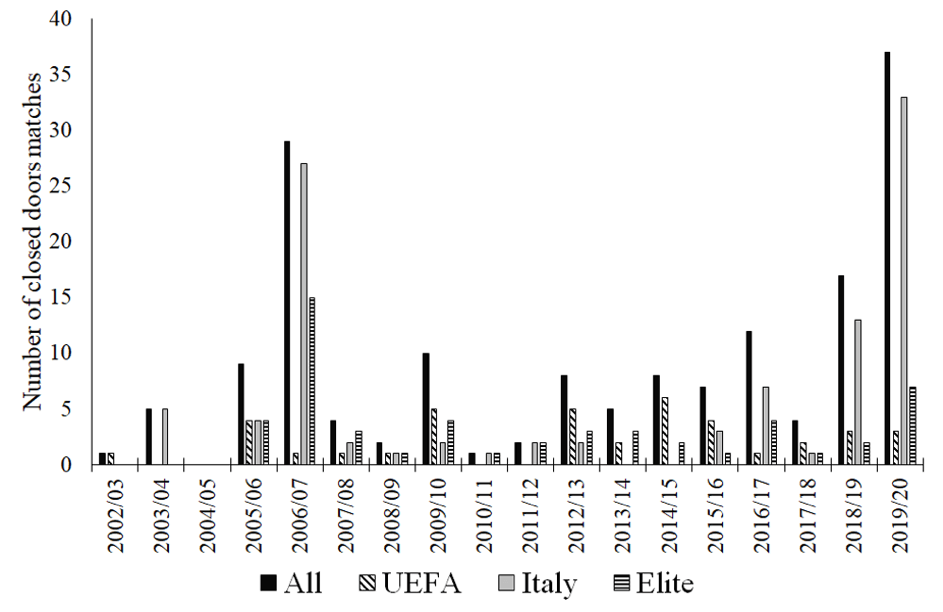 The number of closed door matches in European football by competition and season since 2002/03. Carl Singleton, Author provided

Although there are plenty potential explanations for the existence of the home advantage in the economic literature on professional team sports (e.g. the home team might be more familiar to the environment, players should be less fatigued and their performance could be improved through to crowd support), we observe that, in those matches played behind closed doors, referees awarded significantly less yellow cards to the away team. Thus, with home fans on the ground, referees seem to subconsciously punish away teams differently.

We observe that, historically, home teams win about 46% of the time in matches with fans, but only roughly 36% of the time when there are no fans.

Do you think clubs could try to recreate the home advantage by introducing artificial crowd noises in the stadium (through the speaker systems), virtual fans on LED screens, pictures of fans in the stands...?

At the moment, I don’t think that’s the case. Although I think it’s an excellent idea to monetize the matchday by allowing fans to purchase a personalized cardboard cutout, these cutouts, however, are unlikely to affect match outcomes. Artificial crowd noise, in contrast, could affect the match, of course, if the sound mixing not only dynamically responds to the action on the pitch but also reflects the social distribution of power within a stadium.

Yes, of course! Coming back to the distribution of yellow cards, for example, we estimate that an away team would receive 0.5 fewer yellow cards when playing behind closed doors. In contrast, the effect of reducing the stadium attendance from, let's say, about 25,000 spectators to 6,000 is equivalent to a reduction of a mere 0.05 of a card.

So, in general, we observe that while small changes in the number of fans in the stadium typically have minor effects, playing football behind closed doors has a disproportionate and strong effect.

Countries such as Poland, Hungary and Russia have decided to allow a limited amount of fans in the stadium (10-25% of the total capacity). Do you believe these limited numbers could influence home advantage?

Yes, based on what we’ve learned so far, I’d expect a positive effect on the home advantage. As the absence of fans is, however, not the only thing that has recently changed in European professional football, just think, for example, about the (temporary) rule changes regarding player substitutions, we need to conduct more research in the future to understand what currently happens when football is played behind closed doors better.

Access the full interview on the ESSMA Knowledge Platform