With new stadium development projects being reported seemingly every week, it is clear that clubs still value the importance of their stadium infrastructure

Not only as their home ground,  but also as a potential revenue driver, as a major attraction point for their city and as a potential catalyst for other development projects in their area.

A modern stadium or arena is one that has to be relevant 365 days per year and is not only a home for football but a home for entertainment. Hoping to make their stadium better fit that new description, more and more clubs are launching (re)development projects. We invited 4 of them to highlight their plans during our session on Stadium Development at the 7th ESSMA Summit in Turin.

All presentations can be found on the Knowledge Platform. While each of the projects presented in this session has its clear own identity, there were a couple of trends that were shared among all of them.

Go to the Knowledge Platform

1) From sports venue to entertainment venue

An important lesson for modern sports venues is that they aren’t necessarily competing with other sports venues for the attention of the crowd. Rather, they are competing with other entertainment options in the city like bars, restaurants and cinema’s and even with at home entertainment options like streaming services, sports networks and online gaming. The modern sports venue therefore also has to evolve to a place that offers more than just a game to watch as stadium operators are faced with the task of creating a unique matchday experience that will invite fans to come back to the venue with friends and family every week.

Populous’ redevelopment of the Stade de la Meinau is trying to achieve just that by implementing a large fan zone just outside of the stadium enclosed by two parks. The fan zone is meant to become a place where fans can gather before and after the match and will help create a unique atmosphere for each match day. 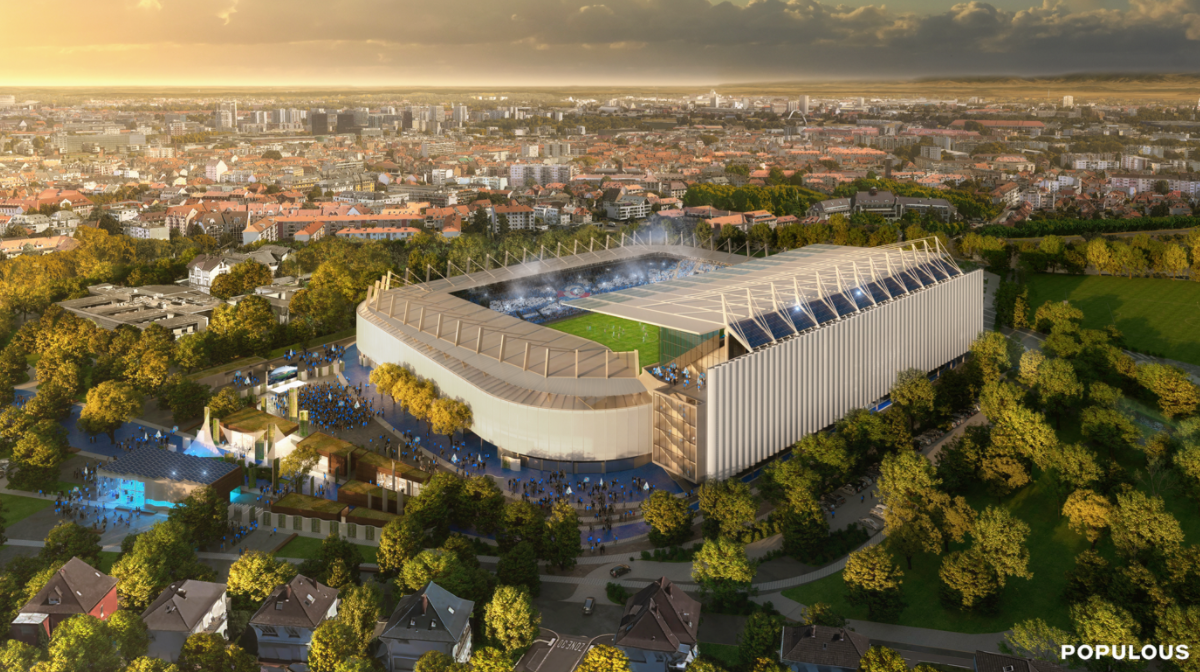 The same type of commercial approach could be found at Standard de Liège’s redevelopment plans for their Stade Maurice Dufrasne. The redeveloped stadium and its surrounding site will include 15,000 sqm. of office space, 2,000 sqm. for leisure activities, 2,000 sqm. of commercial space and more than 1,000 parking spaces.

In football things can move fast. That is certainly true for Venezia FC, whose meteoric rise saw them gaining promotion to the Serie A last season. The unique identity of the club, paired with its unique location helped to turn them into somewhat of a fan favorite. With demand rising and ambitions ever growing the club has turned its attention to redeveloping its stadium infrastructure.

Venezia FC’s current Stadio Pierluigi Penzo sits at a remote location and is too constrained to facilitate commercially viable operations with a higher capacity. Looking at these factors, a plan was unfolded way back in 2018 to build a venue and commercial hub in Tessera, beside Venice’s airport. The goal for the new project is to deliver a modern, eco-sustainable and multi-purpose structure which could be used seven days a week. Apart from sports, it is supposed to serve for entertainment, concerts and cultural activities. With thousands of jobs during both the construction and the operational stage.

Go to the presentation of Venezia FC

3) Sustainability at the forefront

Last but not least, there is a trend that is as clear in the stadium industry as it is in our society. A trend towards more sustainable materials and a more sustainable lifestyle. The brand-new Co-op Live Arena in Manchester is a perfect example of this trend. The event and entertainment arena that was the result of a partnership between Oak View Group, City Football Group and Harry Styles is aiming to become the most environmentally sustainable venue in the UK. It will include 10,500 sqm of solar panels and will harvest rainwater to cover 100% of its water needs.The arena is “aiming for zero”, meaning that it will target zero waste to landfill, zero single use plastic and zero net carbon footprint by 2038.

With one of its other venues adequately named the Climate pledge arena, the Oak View Group has clearly stated its commitment to sustainability and many other venues are set to follow in their tracks.

Go to the presentation on the Knowledge Platform

Be sure to check our last stadium industry overview of 2021!
08Dec

Read up on the latest projects in the European stadium industry!
03Dec

Our partner CEAS-IMC joined us for 3 days in Belgium.
29Nov

Stadium Intelligence Report 2021: all research highlights in one report

Over the past year, ESSMA gathered data on various topics, conducted many interviews and answered more than 100 strategic questions!
25Nov

Industry update: fan tokens and safe standing on the rise

On November 9th and 10th, the ESSMA-community assembled in Allianz Stadium, home of Juventus, in Turin.
13Oct

Populous joins the sponsor list of the ESSMA Summit 2021