How Portland Timbers build their fanbase through traditions and community involvement

Joining the MLS in 2011, the Portland Timbers were looking for a way to launch their club aiming for fanbase development. During ESSMA Spotlight Cory Dolich - Portland Timbers Senior Vice President of Business Operations - shared his case study on how the club approached this challenge.

Rose City ‘Til I Die

Aiming to create an emotional connection with the fans that transcends even winning, Portland Timbers adopted Rose City ‘Til I Die as their slogan. RCTID was part of the natural culture and language the supporters already had. Using this slogan elevated the authenticity of the club's brand creating an emotional connection between the fans and the club.

It’s not just about one player, one game or just one season. It’s about the team, the town and the fellow fans

Representing the club's history involving lumbermen Portland Timbers have a unique mascot called Timber Joey who cuts of a piece of log every time his team scores a goal, creating a one-of-kind experience at Providence Park 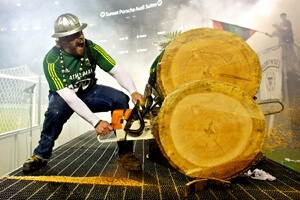 Using axes as an anchor for continuity

Before the 2011 season started Portland Timbers aimed to increase the connection between their fans and the club. The club did this by putting up billboards with pictures of fans with an axe and giving 4 fans the opportunity to win a place on these billboards all over town.

The club now repeats this initiative every 5 years to build a long-term relationship with its fans using the axe as an anchor for the continuity of the club’s traditions.

Reinforcing who we are

To reinforce the clubs brand Portland Timbers released 2 mobile games using some of the club's iconic elements such as an axe, roses, etc. to make the club a part of the fans’ everyday life.

When the club reached the MLS Cup in 2015 the club decided to bring the log Timber Joey uses, creating extra engagement with the fans.