Panathinaikos FC and AEK FC join ESSMA, who strengthens her presence in Greece

Recently, both AEK and Panathinaikos FC have decided to join the ESSMA-network in the stadium industry. By connecting to our wide network of experts, they gain access to innovative ideas for stadium construction and operations

In the case of AEK, who is building a new 32,000 capacity stadium in Athens, they will benefit from our benchmark reports and gain access easier access to delegates of comparable international projects. Panathinaikos FC on the other hand is a textbook example of a club whose stadium is owned by the city, all surrounding difficulties included. AEK FC and Panathinaikos FC now join PAOK FC in the Greek delegation in ESSMA.

Membership as next step in growth plan of Panathinaikos FC

Panathinaikos FC has a rich history in Greek professional football competition. They believe this is the right time to join ESSMA as a next step in the continuous effort of the club to grow and improve.

"Panathinaikos FC decided to join ESSMA as we strongly believe that this affiliation can and will prove mutually beneficial.” States Spiros Vlachos, Director of Operations.  “In particular, we now have the unique opportunity to exchange ideas, the best practices and suggestion across Europe with other ESSMA members and to stay up to date with the industry's news and developments. We are confident that ESSMA will become an integral component of Panathinaikos' FC future through the provision of knowledge platform and workshops.”

AEK Athens is one of the biggest clubs in Greece and carries a great history. AEK was founded in 1924 by Greek refugees to keep alive the values and memories of the homeland. The realization of the new Aga Sophia Stadium is the biggest project of the club so far.

The construction started in February 2018 and is scheduled to open in 2021. The stadium is modelled after the Hagia Sophia Church in Istanbul, as AEK has its roots there. The majestic main entrance and four massive towers in all corners are the highlights, which reflect the ancient architecture. Although the design breathes ancient elements, modern technology will be a substantial part of the new, modern stadium. 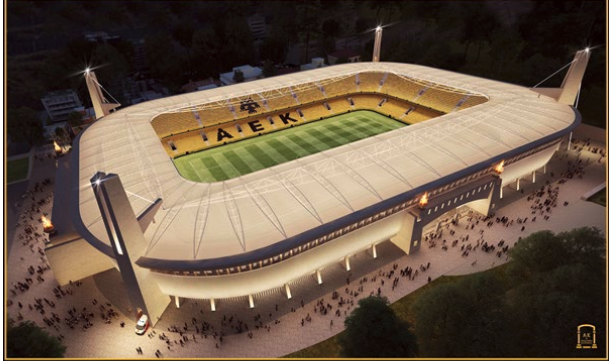 “ESSMA is the strongest partner to support the European stadium industry in its growth. We would like to collaborate with several top companies and discuss sectors related to hospitality and fan experience, safety and security, operations, ticketing, environmental friendly practices” says Angeliki Arkadi, General Director AEK FC. “Furthermore, we look forward to be consulted by other members of ESSMA which are established key players and participate in several surveys and various events in order to be informed from experts about all new trends and best practices in the industry."

Get to know SMA and gain access to their network!

Despite the huge impact of the COVID-19 pandemic on the stadium-industry, ESSMA managed to digitize fast and continued to support her community with digital events and knowledge-sharing on new topics …
27Apr

As part of our mission to inform the European stadium industry, ESSMA is proud to present its Pitch Management Report. In this report, we discuss several “hot topics'' from the pitch management indust…
09Feb

2021 is a year with a festive touch for the ESSMA-community.
27Jan

As the new representative of the Corporate Partners, Oliver wants to focus on a better understanding of the corporate partner expectations of ESSMA.
10Jun

Vissel Kobe is one of the leading clubs in the J.League with a sustained ambition for excellence.
19Feb

Safety and security is one of the focus areas in stadium development. ESSMA will continue this focus as a stadium federation and even expand our horizon by partnering with SGSA, the United Kingdom Gov…