Rethinking stadiums : how to welcome your fans back? An ESSMA case-study

Interesting times ahead, where learnings of those who already restarted are of vital importance to their peers. ESSMA interviewed several stadiums to collect their insights.

Nowadays, the majority of European competitions are opening the season with a certain number of fans in the stands.For instance, 10% of stadium capacity is allowed in Russia, whereas Denmark opens up to 20% of the stands. French clubs will welcome back up to 5,000 fans as of the new seasons kick-off, whereas the Netherlands opt to re-open stadiums for 1/3rd of fans.

Go directly to the full case-study

Read the condensed report in PDF

Interesting times ahead, where learnings of those who already restarted are of vital importance to their peers. ESSMA interviewed several stadiums to collect their insights

Being a European observatory, ESSMA interviewed several stadiums on the return of those fans. How did they organize the multitude of hygienic measure? How to handle ticketing? And what impact is there from an operations point of view? We spoke with FC Zenit, Brøndby IF, FC København to find out more on the topic. Full versions can be found in the report. However, 5 trends can be identified throughout Europe on the re-opening of stadiums.

1. Hygienic measures are implemented and greatly respected by fans

All stadiums provide information through posters and screens. Sanitisation posts are installed vigorously in and surrounding the stadium. Brøndy IF even launched a so-called spectator journey you receive once you purchased your ticket. Six pages of detailed content tell you what to expect and how to behave. You can find an example later on in the document. Fans are being spread out in the stadium, both in terms of crowd flows as seating. Nevertheless, body searches remain an important part of the safety protocol and are still being carried out.

2. New standards for stewards, who remain pleased to return

The new hygienic protocols come with new tasks for the stewards. Remarkable is that no stewards have to perform more medical tasks. They send doubtful cases towards first aid or there are even doctors present at the gates. The addition in responsibilities results in experimental steward training, like video training, online stewarding meet-ups and so on. However, these measures did not temper the enthusiasm of stewards to return. None of the interviewed stadiums had trouble finding sufficient stewards for the matches. They are most definitely keen on returning. 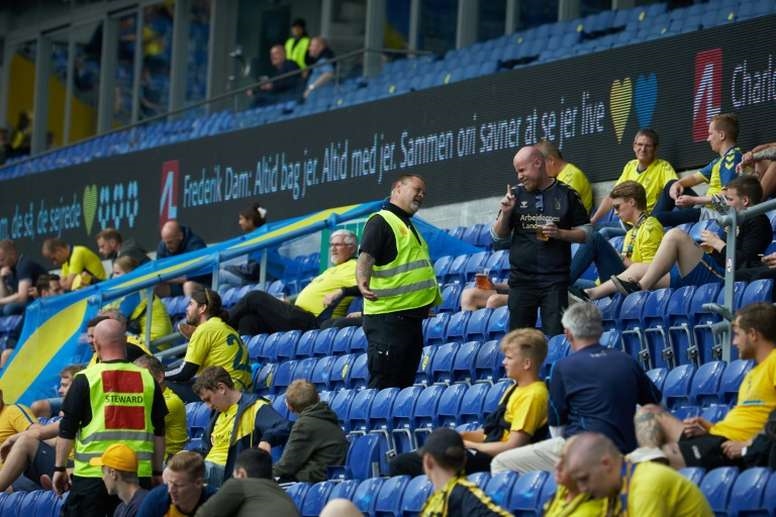 3. Season ticket holders have priority once a stadium re-opens

All interviewed stadiums decline away fans and give priority or exclusivity to season ticket holders. Available seats are marked with stickers and Danish clubs even shuffle fans from their normal seating so everyone is in a new seat, a location strange to them. This to discourage the feeling of belonging and socializing with known fans. Ticket handling quite differs from one country to another and varies from complete manual process to automated software modules that integrate social distancing to facilitate the stadium professionals. ESSMA Corporate Partners roboticket and 3D Digital Venue are often named as software partners offering relevant tooling in ticket handling.

4. Profits are not main reason to resume operations in stadiums

The stadium managers we spoke to were unanimous: operating a stadium with a small(er) number of fans is not profitable, not even by far. Other reasons prevail to re-open stadiums, such as sportive aspirations of completing and even winning a season.

5. Uncertainty on next season regulations and sales

Up to today, uncertainty rules with regard to next season. The majority of countries lack certainty when it comes to government regulations. Nevertheless, the renewals of season tickets have started and is successful according to various clubs. The fans remain loyal to their club and show support through the renewal.

Read the condensed report in PDF

Discover the latest news from the industry!
11Apr